I Was in it to win, with an Unknown Blood Clot and All!!! AWARENESS IS KEY! 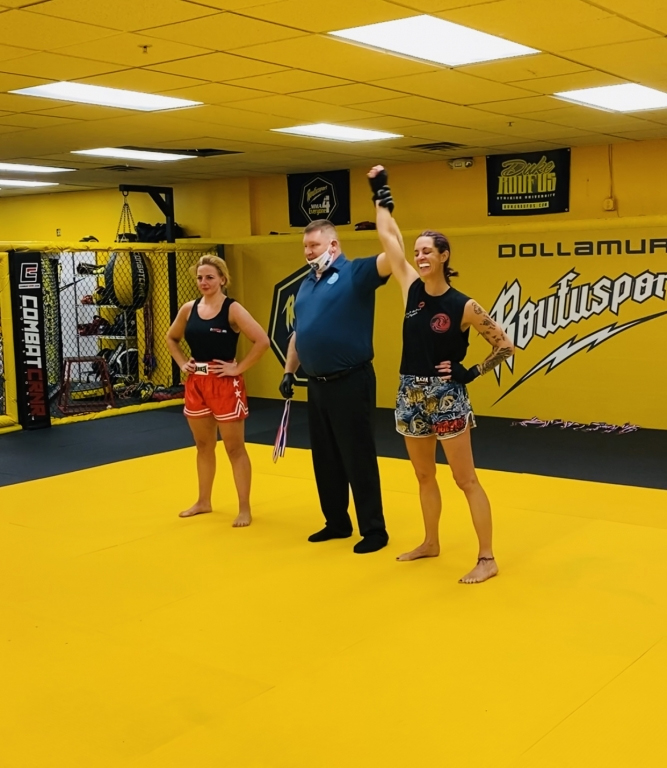 It is not a surprise how much I love this sport. How much I love to train hard. Those that know me know that training and working out hard is what I love to do aside from my family. It is my therapy and outlet. When I was younger, I remember watching Rocky 4 with my brothers when it first came out and I was 7. After the movie was over I remember going into my room and pretending I was training like Rocky. I thought it was cool to  have beads of sweat roll down my face. When I would "play house" with my friends I was the girl who had a
pretend black eye because I thought it was cool and tough.

I don't know if it is because I grew up with brothers and was surrounded by their friends, but ever since kickboxing/boxing came into my life, I have been determined to try to be Rocky ever since. People are like "It is just a movie" and I tell them NO it's not!!! He's real! hahaha! 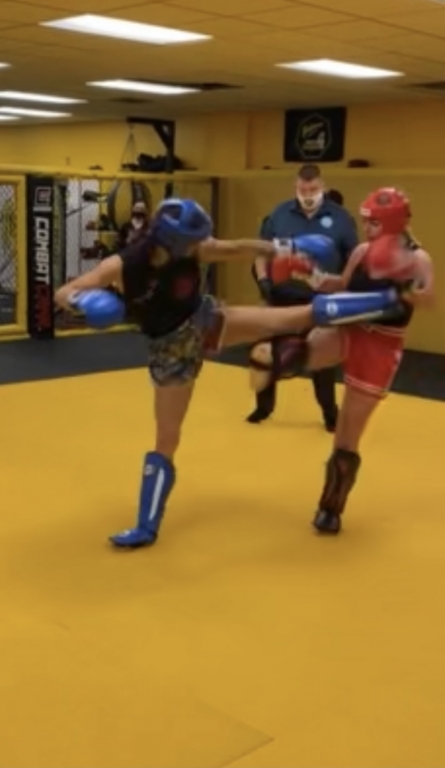 Fast forward through many of my articles and what my blog is partially about where I have explained why and how I am where I am and still fighting. This last tournament on January 9th was a fun one. It was a " Kick Light Tournament." For me it was more about getting the nerves out and prepare for what lies ahead this year in accomplishing my goals in full contact kickboxing. I was grateful for the WAKO Kick Light tournament because it was the ONLY thing that has happened in the last year that we could compete at. It is important to me to finish my goals and dreams and then be able to close the book on this part of my heart in competing within this sport.

While I was training,  I kept saying that ever since having Covid in October I just did not feel quite right. I had a full blood work physical done for my yearly check up a few weeks prior to training and my doctor told me all my numbers were "boring" to him, meaning...I was in tip top shape. I just couldn't help though feel as if my heart rate was a little off when I would train. We just assumed I was not in fighting shape yet. I had bought new gym shoes and the first time I wore them doing sprints on my treadmill, my right foot went numb a few times and we just assumed it was because they were new and had to be broken in a bit. When I was sparring, I would complain my foot was going numb as well, I just assumed it was because it was really cold and we do not wear shoes so I just assumed it was because the mats were freezing and that it would go away when I warmed up. 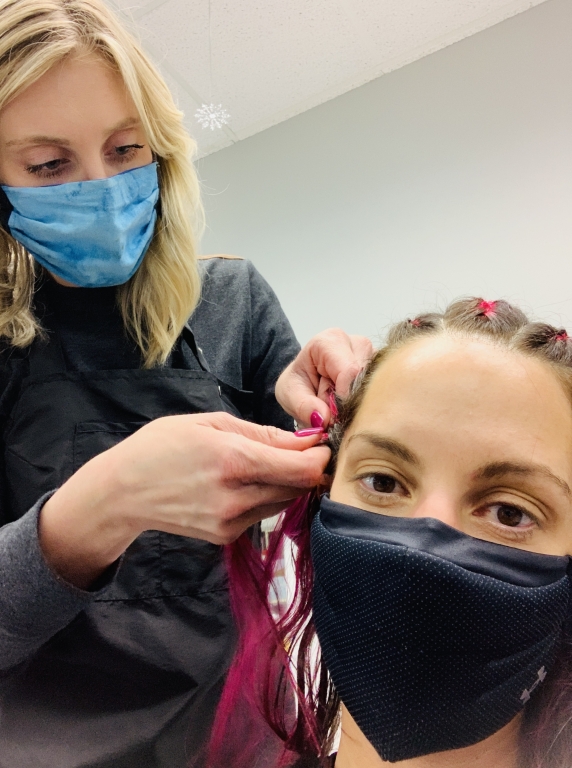 My training had come to an end, my hair was braided and we were off to Milwaukee on Friday night for the tournament early Saturday morning. I told my one trainer I felt a little under the weather but had no symptoms to explain that feeling. We just assumed it was nerves or tiredness. The next morning I got up and did a few rounds of jumping rope in my room. I do that to activate the body, wake it up, get some of the jitters out, get the mind right and let it know what it had to do a little later that day. I felt heavy, not in my weight because my weight was pretty dead on. It was my legs that felt very heavy.

We had arrived at Duke Roufus's Gym and I was ready! My mind was right, I was just happy to be there and have some fun. The referee said "FIGHT" and we did. The first round I felt ok, but there were moments I felt like I was in one of 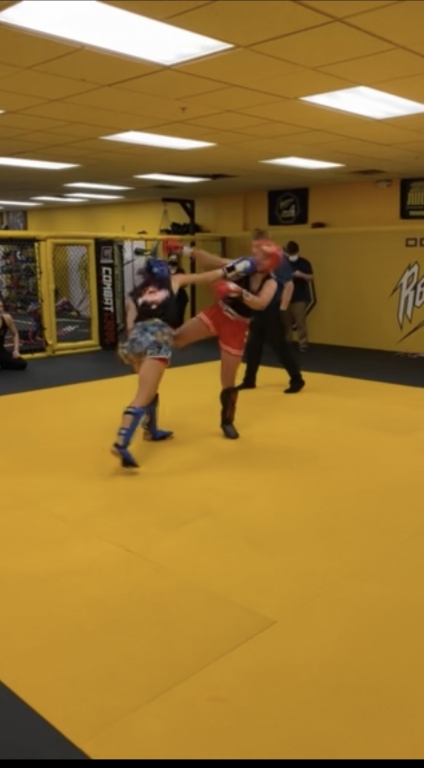 those dreams where you want to run, but your legs won't move. There were moments my brain said to "kick" but they wouldn't. I missed several opportunities I could have and should have capitalized on and my body was just struggling to do the work. At the end of the second round I was very winded and although my hand was raised in the end in a win, I could not help shake the fact of how heavy and winded I felt. I know how many rounds I have gone with my sparring partners, how many miles I had sprinted, the snow workouts, drills, etc. I had done to prepare for a 2 minute 2 round fight. This should have been a cake walk. (not taking anything away from my opponent! She was a true talented warrior from a very well known gym and I take nothing away from her) I just did not feel like myself. 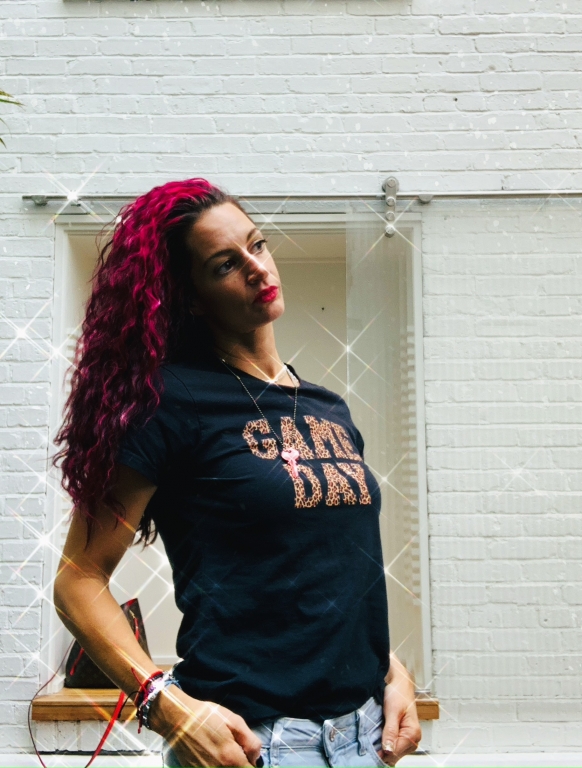 The next day we went out and watched the Bears game, went dancing and I felt great!!!! I climbed the top of a snow mound yelling "ADRIAN!!!!!" That Monday after I had a weird pain in my calf wondering if I tweaked it being silly Sunday night. I went to go get it check-out.

When I was 31, I had a major life threatening DVT that also went into my lungs. I was hospitalized for 3 weeks and on bed rest for a month. The blood clot was because I took YAZ birth control and I am blessed to be able to be writing this to tell everyone and spread awareness how that particular brand DOES in fact have a higher risk of blood clots. I was UNDER 35, NEVER smoked (STILL have never) worked out all the time and was not over weight. I was and am like the opposite of a blood clot! ALL the things I am still till this day accept I am 42. 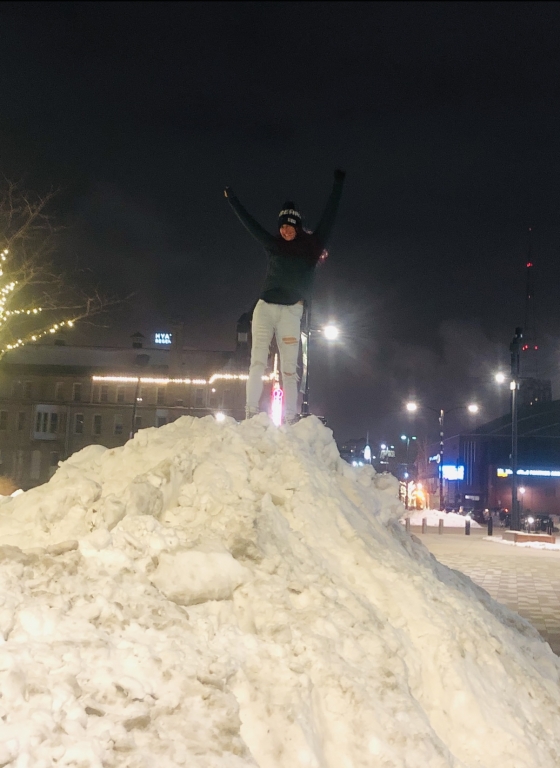 So there I was in the  E.R., I knew in my gut they were going to tell me I had a clot. The doctor popped her head in and told me there was in fact a clot in my calf. Even though I knew it, I didn't understand. It didn't JUST form there it had been manifesting itself for quite some time. I was a bit confused and upset until someone told me of some recent research from Hopkins, "In some people with COVID-19, we're seeing a massive inflammatory response, the cytokine storm that raises clotting factors in the blood," says Galiatsatos, who treats patients with COVID-19. "We are seeing more blood clots in the lungs (pulmonary embolism), legs (deep vein thrombosis) ad elsewhere, "he says. NOV 18, 2020. The fall out from COVID could last longer than 6 months. You can have antibodies, but STILL have inflammation. "When the virus damages the inside of the blood vessel and shreds the lining, you wind up with a situation that is really untenable for blood flow."  Even though I had COVID in October, the fall out from having it can last longer than 6 months and you can definitely still have inflammation. So I asked the Doctor, "Is this any way related to my fight?" she said "No, not at all." After they did an extensive blood work to make sure I did not have a blood clotting disorder, I guess I understand now how this could have happened. It is the ONLY thing that has happened differently to me in the last 11 years from the previous clot. If you have COVID or had it and are concerned you could get a blood clot, PLEASE ask your doctor!!!! 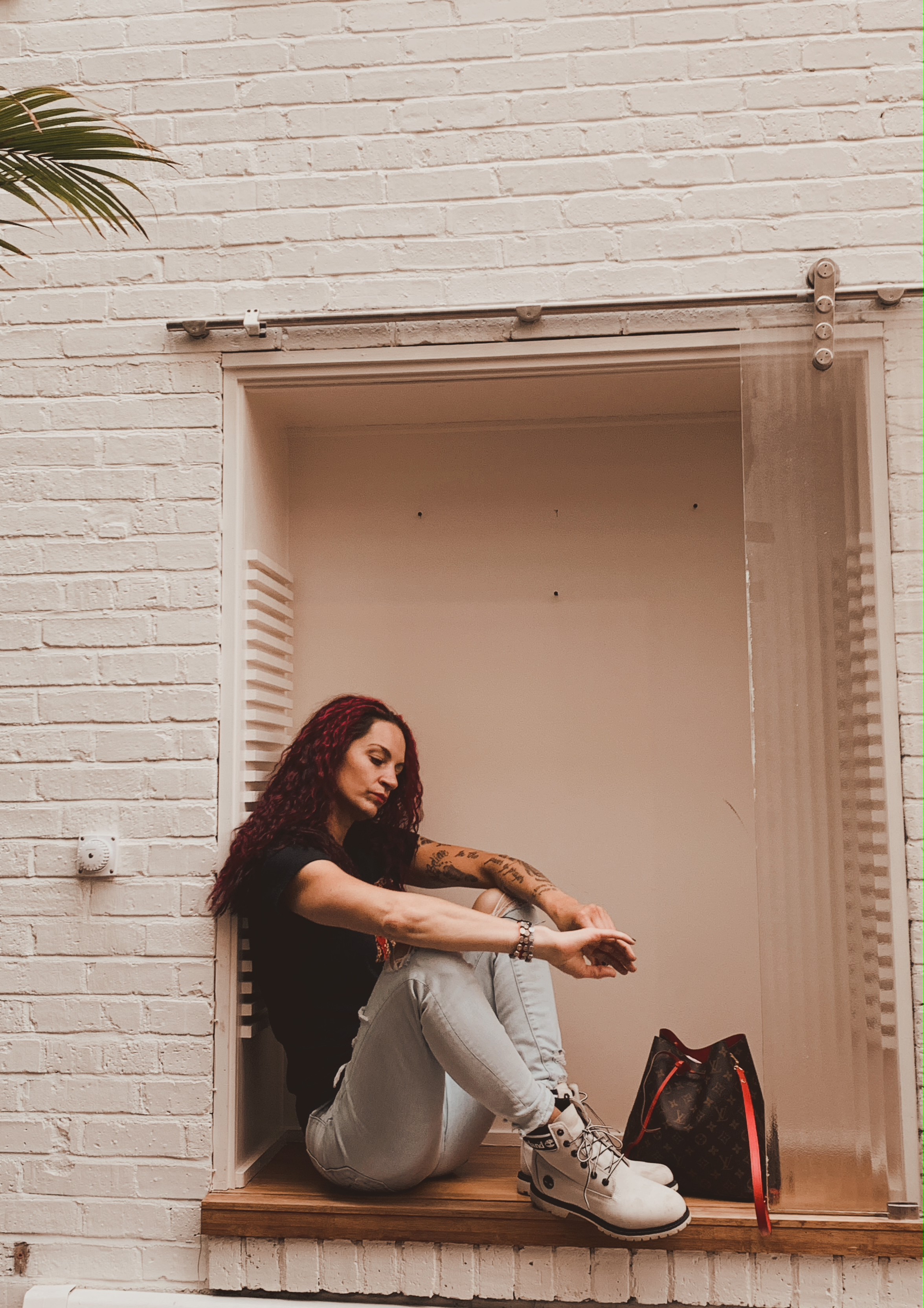 I did not want to write this article, my first thought was,I did not want to tell anyone. I did not want anyone to think this was from fighting. I could hear their words "Well, this is what you get for still fighting, maybe you should stop now" or maybe that was and is in my own head. Either way, I was embarrassed and felt as if I didn't want anyone to know. I was on cloud nine from winning my fight even though I did not perform how I wanted too. (And NOW I know why!)  I feel like I got my ass kicked two days later by my blood clot.

So here I am, almost three weeks later and I feel about 90 percent better and I am SO incredibly grateful for that!!!!  The main purpose of this article is to spread awareness. Awareness that at age 31, never have smoked, so incredibly active, had a major life threatening blood clot that hospitalized me for 3 weeks and a month on bed rest because I took the birth control YAZ. It was a while before the doctor's could really pin point what was going on because I did not fit the description of a "blood clot." YAZ is known to have a higher risk of blood clotting than other forms of birth control. " Studies show drospirenone, an active ingredient in Yaz, may significantly increase the chances of developing venous thromboembolic events is (VTE) or blood clots. Studies have showed up to three-fold higher risk" If something does not feel right, PLEASE PLEASE PLEASE go get it checked out. It is only a few hours of your life that could save you from something that could manifest itself into something more serious. I STILL do not fit the blood clotting definition but I knew enough to go get checked. PLEASE be aware of your body. 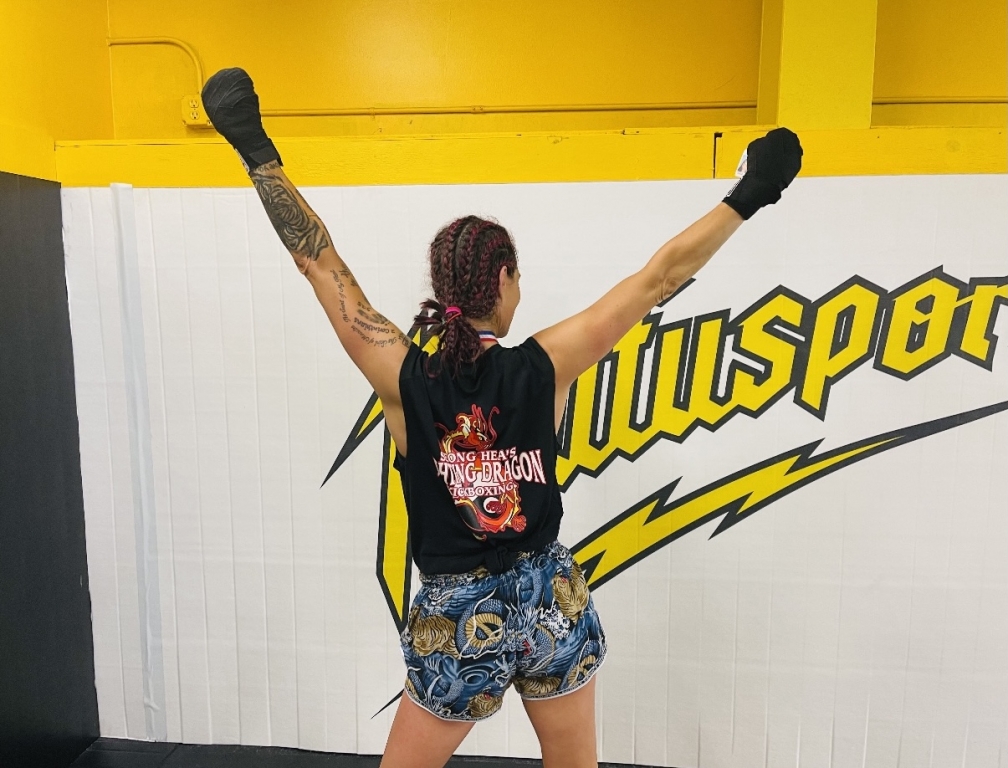 I was upset for sure, more bummed and disappointed. Being healthy does not make you invincible. BUT, I will say it WILL help you bounce back when life throws you a curve ball. That is exactly what I am doing and on my way to doing. I will not let this come in between me and my goals, I will not let this define me in upcoming future challenges and it certainly will not deter my mind in going after what I want after I get the doctors clearance to train 100 percent again. I will treat it as any injury and move forward and keep practicing a positive mind when it goes astray! 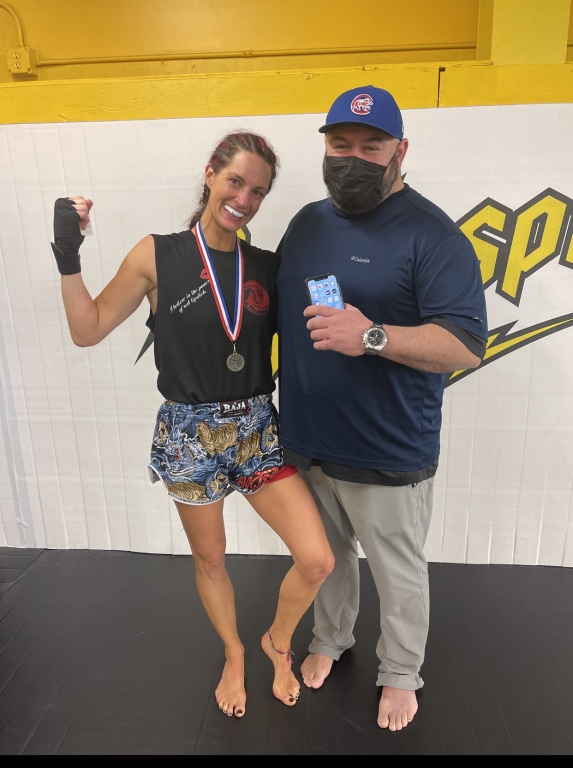 When my husband and I got married, in my Dad's speech at our wedding, he gave a motorcycle helmet to Roger and told him he may be needing this, for he was in for the ride of his life. Until this day,  11 years later, my husband jokes about that helmet and he just asked if my parents could get him a new one because the one they gave him is pretty beat up!!!! BUT hey!!! At least I am not boring." After all, " I would rather die from passion, then boredom!"

"When you can't control what is happening, challenge yourself to control the way you respond to what's happening. That's where your power is.-Anonymous

"Run when you can, walk if you have to, crawl if you must; just never give up.'-Micheal Jordan

More in this category: « Indoor Illinois Winter Projects to Help Keep Kids Entertained and Busy How Do You Find Time For Your Passions??? »